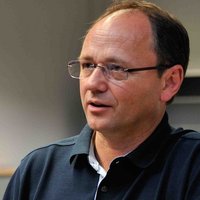 Don’t be scared of technology and science - they are the building blocks of knowledge and expertise.

Volker Damman is a professor at the International Space University in Strasbourg, France, but for many years he was a flight surgeon on space missions.

That doesn’t mean he operated on astronauts aboard spacecraft though!

Flight surgeons are like the astronaut crew’s coaches. They help them keep fit during their pre-flight training on Earth, and then when the mission takes place a team of surgeons on the ground stays in touch telling the crew how to keep healthy.

If anything goes wrong with an astronaut’s health, or they get injured, a surgeon will tell them what they need to do to recover. They also monitor experiments concerning astronauts’ physical reactions to space conditions.

It’s a demanding job and there are all sorts of unusual problems - but it’s also rewarding to help in the rare times when someone is in trouble.

What does a flight surgeon’s job involve?

On missions, a flight surgeon is based on earth in mission control, but very closely linked to the crew. You help with the training before they take off, and then when they’re in space, there will probably medical experiments and you make sure the experiments are worthwhile, and carried out correctly. You also make sure they’re in good physical and mental health, and help if there are problems.

Are there health risks in space?

Yes. For example weightlessness means a lot of dust and dirt floats around, so astronauts get things in their eyes. And because there is no evaporation their skin is almost always sweaty, which can lead to skin infections. Astronauts are trained to a do lot themselves, like paramedics. There’s a lot of pre-flight medical training in which they learn how to pull out teeth or stitch wounds, and prescribe medicine for each other. But flight surgeons on the ground can advise and direct them.

And what happens if an astronaut is injured or ill?

That does happen once in a while. If they need help they talk a physician in mission control, and go through a medical procedure to find out how to work out what’s wrong, and then what treatments they need. They do also have a big procedures book that's embedded in the craft. It starts with all the emergencies, and then explains how all the organ systems work.

What does a flight surgeon do on a typical day during a mission?

Every day is different. We work in a team, with biomedical engineers keeping a close eye on the astronauts, and the flight surgeons standing by. If there’s a medical problem they call you. It might not be about an illness or injury – we also to ensure they get enough sleep and exercise, and check the experiments on their own bodies and health are ethical.

I was 10 in 1969, so I was one of the lucky ones who witnessed the first moon landing. After that I was always interested in science and technology, but I never dreamed of working in the domain of space, and never knew there was a job for a doctor there!

At school my main courses were chemistry and biology, and at university I studied medicine - I wanted to do something with my hands, so I planned to become a surgeon. However, I also enjoyed using computers, and halfway through my course I realised I wanted to do more with my interest in technology, so I ended up studying radiology and nuclear medicine. That basically means using radioactive materials to find out what’s wrong with people. It sounds scary, but it isn’t!

And how did you become a flight surgeon?

I worked in hospitals, then in the late 1980s I applied for job as the doctor on a space mission, working for Germany’s space agency. I stayed for six years, living in Houston, Texas with my family, then I went to be head of space medicine at the European Space Agency. I was the only one in the department when I started, but by the time I left to work at the university last year, there were 25.

What  skills do you need to be a flight surgeon?

You have to be comfortable with engineers and technical systems, and you need to be able to deal with problems calmly and rationally.

You learn a lot of that through training, though, when you do simulations with engineers creating problems for you to solve. I was always nervous, but in a positive way – anxiety and adrenaline make you ready to act quickly if something happens.

What’s the best thing about doing as a  job?

Space missions to the International Space Station are such a multicultural endeavour, with people of different cultures, languages and philosophies working together. So you learn so much. For example, Russians think about health in a different way to Westerners – they think more about the whole self, while we think of people as a collection of different parts.

I think the ISS shows how the world could be better: it’s not just about science, it’s about we progress as people, how we approach frontiers, and learn to understand the universe together.

Never give up. If you have dream, hold onto it, and look into ways of making it come true.

Remember the path to reach the goal might not be straight, you might have take some detours along the way. Don’t be scared of technology and science - they are the building blocks of knowledge and expertise.

Keep the big picture in mind. Even if you’re just seven or eight years old, try to take in the beauty of everything around us, and don’t decide you’re not interested in something before you’ve looked into it and decided for yourself.