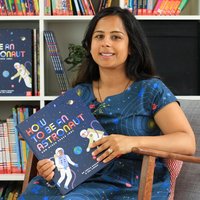 Don’t be put off by thinking space exploration is only for certain kinds of people – anyone can do it if they work hard. Just have a go, and be proactive.

Space scientists are in some ways the unsung heroes of space travel. They carry out important research work that often leads to discoveries that enable us to explore space in new ways. They might study planets, like Sheila, or anything from the mechanics of spacecraft to the Earth’s atmosphere and radio communications.

Whatever the subject, they’ll gather tons of data from space exploration, and work with a team to find out what it all means, and how it might help us to better understand the universe. Sometimes they’ll also help to build the very instruments that are carried into space to carry out measurements.

The International Space Station (ISS) would never have been built if it wasn’t for years of dedicated work by space scientists like Sheila here on Earth.

Sheila is the Education, Outreach and Diversity Officer at the Royal Astronomical Society, but before that she was a space scientist at the Mullard Space Science Laboratory in Surrey.

When you were a space scientist, what did you actually do all day?

Well the days were very varied, but basically I was studying for a PhD in planetary science, which involved analysing data that was being sent back from Saturn by the Cassini mission. The Cassini mission is carried out by an unmanned spacecraft that sends information back to Earth. It took seven years to get to Saturn, so receiving its information every day felt incredibly exciting.

Do all space scientists discover things that help with missions?

It depends. Some research will help directly and right away; some is more about increasing our knowledge. So people researching technology for astronauts making moon landings will quite possibly see the results of their work applied soon after finishing. Parts of my topic, Saturn, were relevant to the parts of space where the ISS is, other parts will be relevant if there is ever a manned space mission further out. One criterion of doing a PhD is that the work has to be new, so sometimes someone discovers something that is world- or universe-changing.

So it’s like being a part of a huge, ongoing project…

Yes, as a space scientist you’re working with a small piece of a massive jigsaw puzzle.

I was always interested in science, and then when I was 13 I saw Tom Hanks in Apollo 13, and from then on I wanted to be an astronaut! It made me think about the moon, and how you could could go there, and about the whole galaxy – and how we are quite small in it.

What makes you so into it now?

A fascination with what’s out there, with what we’ll find. My interest progressed from manned spaceflight to what lay out there in the solar system. Although humans have been no further than the moon, we have sent ships to other planets and taken pictures, so we can look at other planets, and feel a link to them.

I wanted to be an astronaut, and in those days – the 1990s – there were two main routes into that: one was by learning to become a pilot in the armed forces, and the other was by studying for a PhD in a relevant subject. I did physics, chemistry, maths, Spanish and general studies A levels, then a degree in physics with astrophysics at Manchester University. While I was at university I did some work experience at Jodrell Bank, and that led to another placement at another radio telescope (ATNF CSIR) in Australia, which helped to inspire me to do the PhD.

Is it hard work?

Sometimes – you have to concentrate and motivate yourself, and be prepared to learn new skills. There’s also a lot of work in computer programming – it’s not just doing experiments. But it’s also so exciting to be using this data that has come from space!

Do things ever go wrong?

Of course! Sometimes the data can take ages to come. Sometimes spaceships blow up on launch pads and you lose the instruments you were going to use to get data from. All kinds of things might happen, but you solve the problems with your team.

And what do you do now?

I promote the amazing work of the Royal Astronomical Society (RAS), and try to encourage people of all backgrounds to take an interest in space. I worked as a teacher for a while, and the RAS offers some free teaching courses, so I enjoy that aspect, but most of all I love reaching out and talking to people about the subject!

What advice would you give to someone who was interested in a career working with space travel?

Don’t be put off by thinking it’s only for certain kinds of people – anyone can do it if they work hard. Just have a go, and be proactive – write and ask people for help and advice, and don’t worry if they say no.